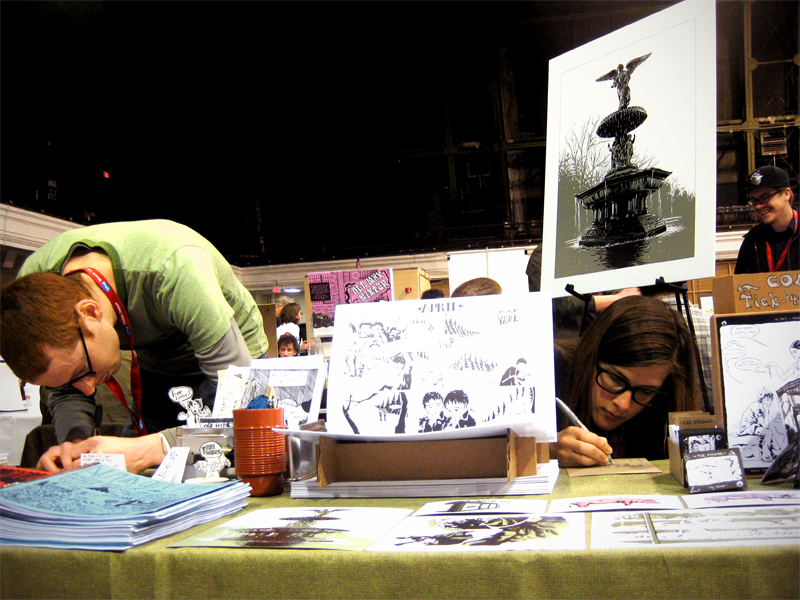 [ neil and girlcate prepare for the morning rush. ]

look, i’m not complaining. mocca was, in my opinion, more or less back to its old, awesome self this year.

and the armory is growing on me. sure, it’s impersonal and climatically oppressive on even the balmiest of april days, but it also allowed for smooth flow of foot-traffic and reasonably egalitarian table assignations, neither of which were merits boasted by the festival’s old digs. and, while one should always exercise caution disagreeing with ms. tryharder, i will admit to loving the cluster of out-of-the-way reading tables. and okay, exhibitor space is still impractically expensive, but a critical mass of us remain willing to lose money when doing so is this much fun.

my only serious lingering complaint is how freaking terrible my pictures look. they leave me longing for the flooding daylight and luminescent walls of the puck building, which, despite its crowded corridors and unreliable climate controls, gave us such picturesque memories.

but whatever. the point is, comics:

○ i was again fortunate enough to exhibit beside chicago cartoonist and bookseller neil bridaeu, a storyteller of unparalleled heart, and one of the scene’s most infectiously exuberant proponents. neil spent the weekend rounding up new discoveries for quimby’s and giving away all sorts of awesome things for which he should have been charging,

like big robot buttons and sick sock-monster stickers and a magnificent new mini called down in the dumps, which continues the artist’s ongoing exploration of friendship and its discontents. it also seems to be his first foray into the genre of predictive autobiography, by which i mean it’s a pretty accurate account of our interaction during the course of the weekend, despite having been completed a month beforehand.

○ at the eastern end of the table, girlcate and i folded oubliettes, passed out coconut cookies, and plied the new prints of my new york drawings (and also pigs). the archangel michael, renowned for his awesome vengeance but less so for his way with the ladies, even found himself a new home among his own kind:

○ one couldn’t ask for better neighbors than the denizens of tapir tooth, whose persistent joviality in the face of my alternating airs of agitation and exhaustion would be reason enough to sing their praises even if they weren’t innovative and impressive comiceurs, all.

their biggest seller seemed to be google doppelganger, an anthology of the five artists’ experiences searching for themselves (in all senses of the phrase), including a compelling collage-based comic by blujay exploring isolation in the age of connectivity. miriam gibson was peddling hornithology, a blush-inducing “compendium of dirty birds and foul fowl,” which she had filled with her disconcertingly lovely illustrations. peter quach‘s deceptively humorous you don’t know much about jesus recounts the author’s early acquaintance with america’s favorite proto-superhero. missing pieces is andrea tsurumi‘s surprisingly contemplative tale of a young human trying to build a life for herself in the monster world to which she’s been exiled. and alexander rothman‘s delicately rendered comics poems, printed as 11 x 14 color posters, were among the loveliest objects to follow me home from the festival.

○ i had an embarrassment of riches lavished upon me at the team werefolf table. the c.c.s. cabal’s eponymous anthology, werewolf!, collects each member’s unique take on the mythical beast, including an inspired tale of vegan collegiate wolf-womyn by betsey swardlick and an enticing introduction to a teen occult saga by joshua rosen. they’d also put together a new sampler, called table buffet, in which matt aucoin reckons with the hereafter and katherine roy explores the perils of inter-species dating.

i also picked up dance after dark, a short sequence of elegant movements from laura terry, unpleasant people, a fantasy adventure/workplace comedy mash-up by holly foltz, and new collections of delightful odds and ends from holly, matt, and penina gal. these are all names to remember, my friends.

○ new england’s trees and hills collective was well-represented, as always. marek bennett, the brains behind mimi’s doughnuts and the backbone of comics international, had a charming wordless mini called seeds, in which adorable woodland creatures come to a variety of conclusions about the value of a day’s work. and anne thalheimer was distributing the 23rd (!) issue of her autobiographical comic booty, from which i learned about the perks of reffing roller derby matches, the benefits of ending relationships, and why 2010 will be remembered as the year of the monster hat.

○ everyone’s favorite barn-dwelling breeders, matt and robbi of idiots’ books, were back promoting their latest volumes and albums and progeny:

• the new south is the second idiots’ book to arrive in the liner notes of an offbeat folk album. this one happens to be written and performed by a priest. his memorable melodies are peppered with biblical references, but, coupled with keen observations and a relentlessly sardonic wit, they rarely feel devotional. matthew and robbi’s accompaniment, on the other hand, is a deeply reverent stream of melodic delusions and faithful reminiscences, baffling and exultant.

• from the inside out is another story, i submit, about the religious obsessions of godless people. it’s a departure from mathew’s usual narrative voice, which tends to wrap a poignant emotional core in layer upon layer of clever satire, so as to render it generally unobtrusive to those readers who come merely looking for a laugh. this book wears its heart on its sleeve, and while it includes many sources of amusement, they barely take the edge of the horribleness of feeling things. it may be my favorite book in the idiotic oeuvre, a masterpiece of minimalism that forges believable characters in a matter of sentences and a protagonist whose redemption is of the utmost importance despite how little we know about him. robbi does not so much illustrate the tale as offer her own complete rendition, in her own language, on the opposing pages. and you will forgive my vagueness, dear reader, when you read it for yourself, and realize all the wonderful things i have avoided spoiling for you.

• kato is freakin’ adorable, and thus fails to show any significant innovation beyond the duo’s previous genetic collaboration.

○ the temporarily mute but indefatigably colorful miss kiki jones came by with a reproduction of her sexy sketchbook and a seductive introduction to a new tale of old money called pierette. a kind of rococo manga, its pages are meticulously designed, exquisitely illustrated, and far too far from publication (a year, we’re told).

○ would it even be mocca without a new exercise in mind-bending formalism from ken wong? the third in his series of inventive oragami comics, flexagon takes its name from the special mathematical shape in which it’s presented, which must be flexed and flipped to reveal subsequent pages. bits of story are traversed multiple times, but the same panels gain new meanings as the story progresses, and progresses, forever, in an infinite, carefully assembled loop.

○ having myself attempted a few ill-advised acts of anthologizing, i’m amazed at the consistent quality of greg means‘ papercutter. issue 12, like the 11 that preceded it, features three of indie comics’ rising stars at the top of their games. rachel bormann and the deservedly trending nate powell rejoin forces to scalp you front-and-center santana seats. joey alison sayers offers a cautionary parable about the perils of mass appeal. mark campos and dalton webb introduce a seaside community of anthropomorphic animals, reminiscent of walt kelly and african-american trickster tales, that had me from hello.

○ when i first received the call for submissions to caitlin m.‘s new fantastic monsters anthology zine, i was, i admit, skeptical. she wanted contributors to deviate from our creative personas, to go someplace we normally wouldn’t let readers follow, to dwell with the thoughts that haunt our solitude. and honestly, who was going to do that?

the answer, as it happened, is 18 fearless writers, artists, and civilians with whom i’m humbled to share a table of contents. the contributions, which range from comics and illustrations to essays and diary entries to instant messages and personal ads, are at times so uncomfortably intimate, so disconcertingly raw as to make the going rather slow; this is not, you’ve been warned, a beach read. but it is a rewarding read, full of revealing and reckoning. it’s truly unusual stuff, interesting stuff, stuff that sits with you after you’ve closed the book and turned out the light, the stuff of which monsters are made.

• subtext, a small, experimental folded minicomic that elevates show-through (ink seen printed on the opposite side of the page) from bug to feature, by c. che salazar.
• iphis & ianthe, an elegant rendition of ovid by maggie siegel-berele.
• the story of flying robert, a cautionary tale from heinrich hoffmann’s struwwelpeter, as illustrated across accordion folds by marianne r. petit.
• we will bury you by brea grant, zane austin grant, and kyle strahm; part gritty urban neorealism, part expressionist dreamscape, as though sam kieth had decided to draw zombies. 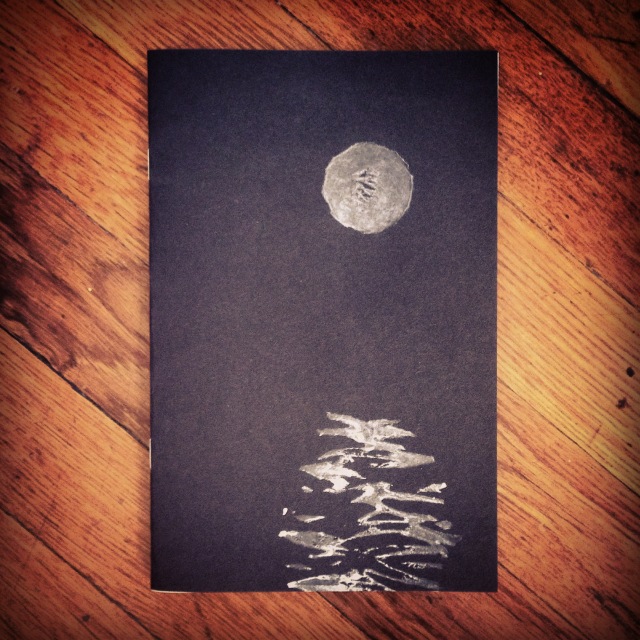